How to control flight, spin and distance

Whether you are out playing on the golf course, or from the comfort of your home on PGA TOUR 2K21, there is no better sight in golf than hitting that perfect shot exactly where you want it to go.

Whether it is watching the ball fly through the air, smashing it 300 yards down the fairway or getting it to land on the green and spin back to the hole, golf has the power to make you feel great having pulled off such a shot.

Regardless if you are playing a round on your own, or exploring one of the many multiplayer options, with PGA TOUR 2K21, you have the chance to hit these shots time and time again.

Once you have the basics in place, you can then adapt and adjust your swing path and club face to elevate yourself as a player, compete with the best golfers in the world and hit those difficult shots with greater success.

Just like Tiger Woods did back in 2019 with that insane bunker shot at the WGC Mexico.

So why not have fun and create your own player profile so you can take on the world’s elite golfers?

Do you want to swing with swag and beat the best? Well, the better you get as a golfer, the more shots you can typically hit.

Whether it is hammering it down, blowing a hooley or glorious sunshine, the best golfers in the world have different shots in the bag, to enable them to play the most challenging courses in the world and adapt to the ever-changing conditions. Just one of the many, amazing features of PGA TOUR 2K21.

If you haven’t already done so, purchase your own copy of the game now and get playing!

Broadly speaking there are nine different shot shapes in the game of golf.

Tiger Woods is famous for using his ‘nine windows’ warm up drill to practise these different types of shots.

Normally, you want to be able to hit one of these three shots:

For each type of shot, it is a case of whether the ball is hit high, medium or low height in relation to the ground and depending on the conditions in which you are playing.

How to change the ball flight in PGA TOUR 2K21

To control the ball flight, you need to hold the shot shaper button (LB/ L1/ L shift) and move the left stick on the controller. 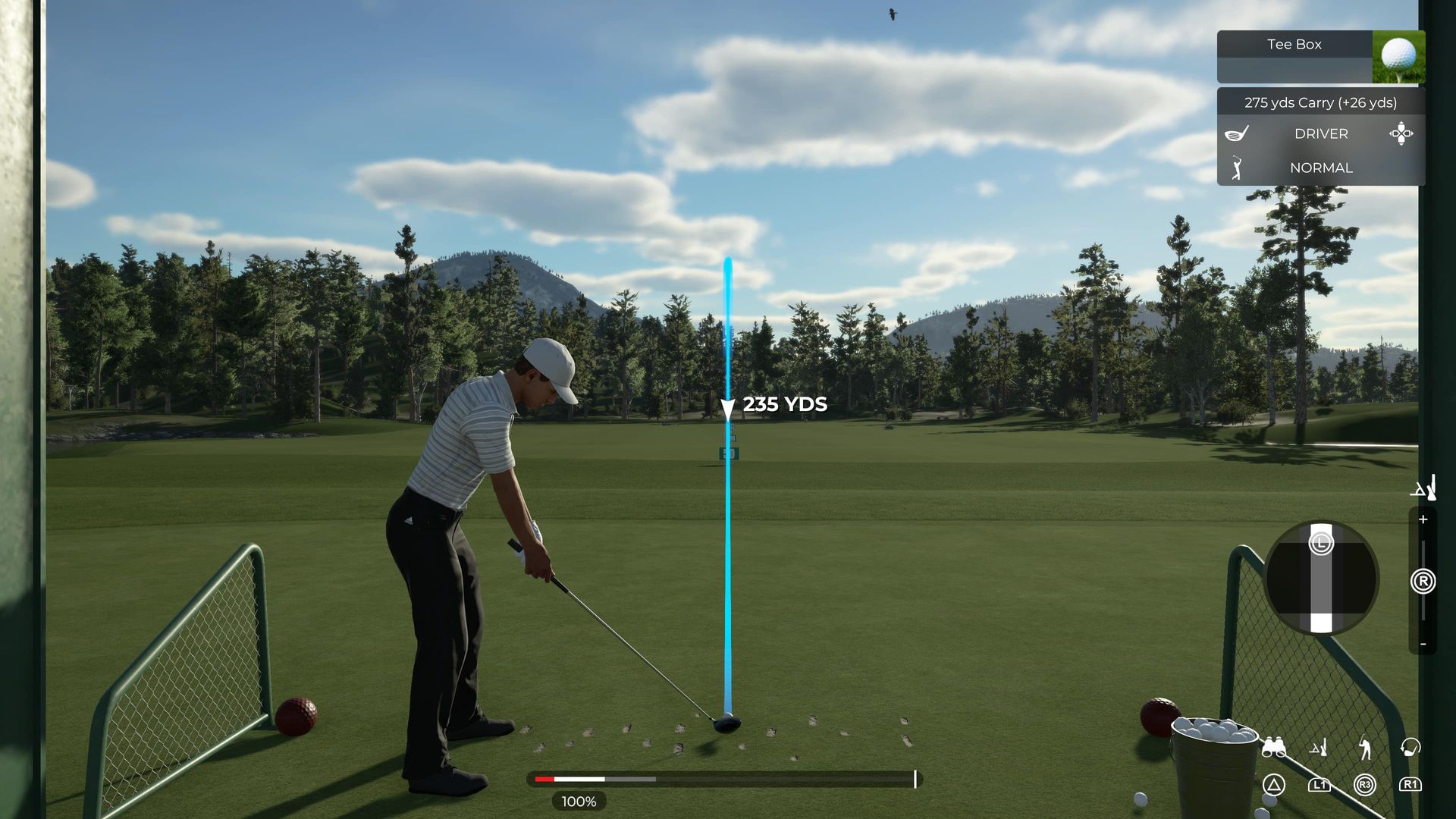 By moving it up, this will make the ball fly lower.

By moving it down, this will make the ball fly higher.

By moving it up, this moves the ball forward in your stance, creating an upward contact with the ball and decreasing the amount of spin. This in turn, creates lower trajectories and increased rollout.

By moving it down, this moves the ball back in your stance, creating a downward contact with the ball and increasing the amount of spin. This in turn, creates higher trajectories and reduced rollout. 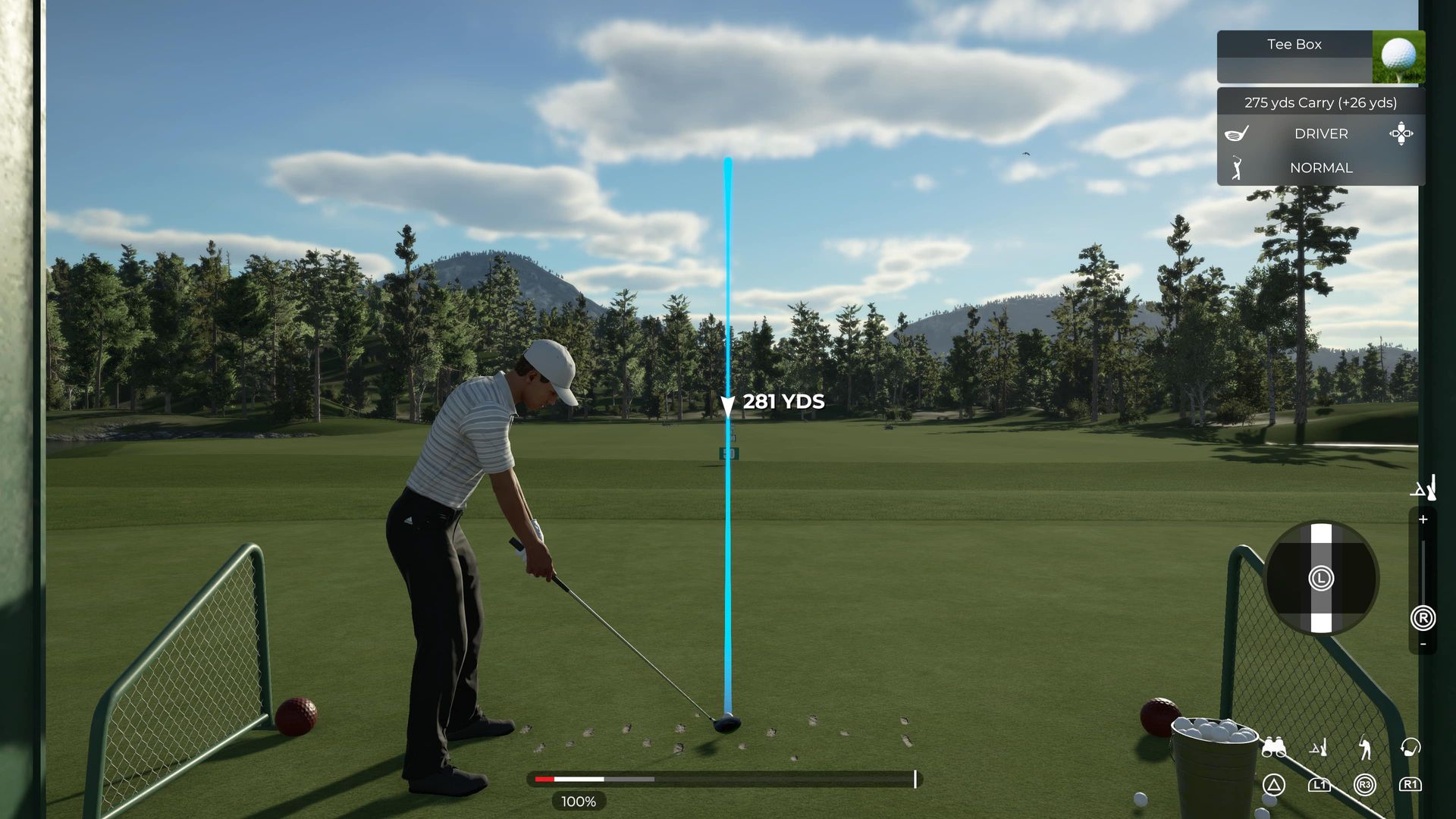 Timing is a very important aspect of the game.

In order to strike the ball as cleanly as possible, you must pull the stick back straight and then move it up/forward in a straight motion.

This is closely linked to the downswing timing of your swing path, which can affect the launch yaw (side to side motion). If either of these is slightly to the left or right, then this will cause you to push or pull a shot away from its intended target.

The speed at which you do this motion is important. Too fast and your hands are ahead of the club at contact, resulting in a closing of the club face and a hook shot.

Too slow and the club is ahead of your hands at contact, resulting in an opening of the club and a slice shot.

If you get the speed perfect, then it should stay on line. 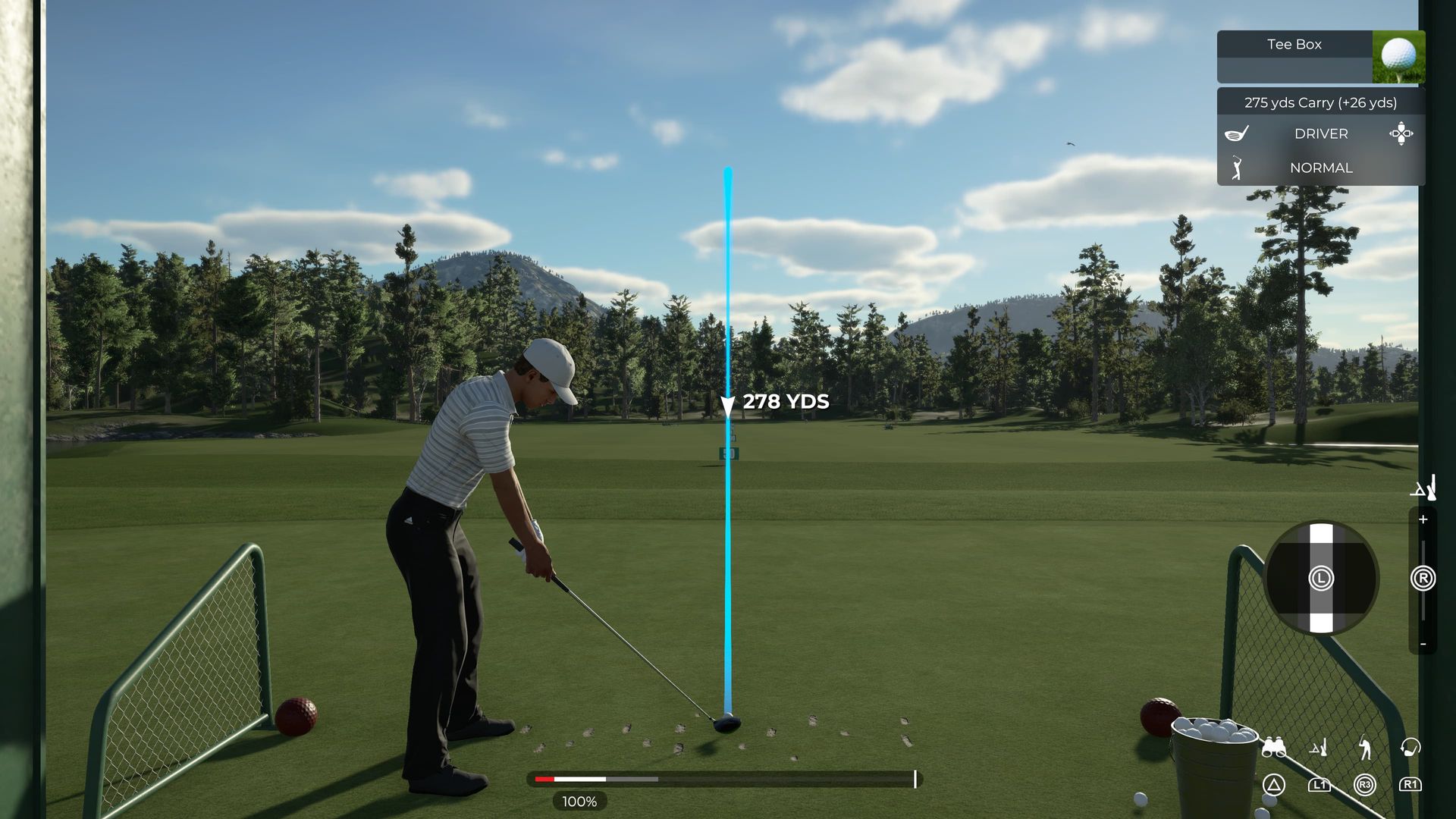 The swing time plane and level of forgiveness will determine how likely it is you will hit an accurate shot.

You should be aiming to keep as close to the white line as possible on the display, in order to keep the ball as straight as possible.

In order to shape your shots, you need to move the left stick either left or right. 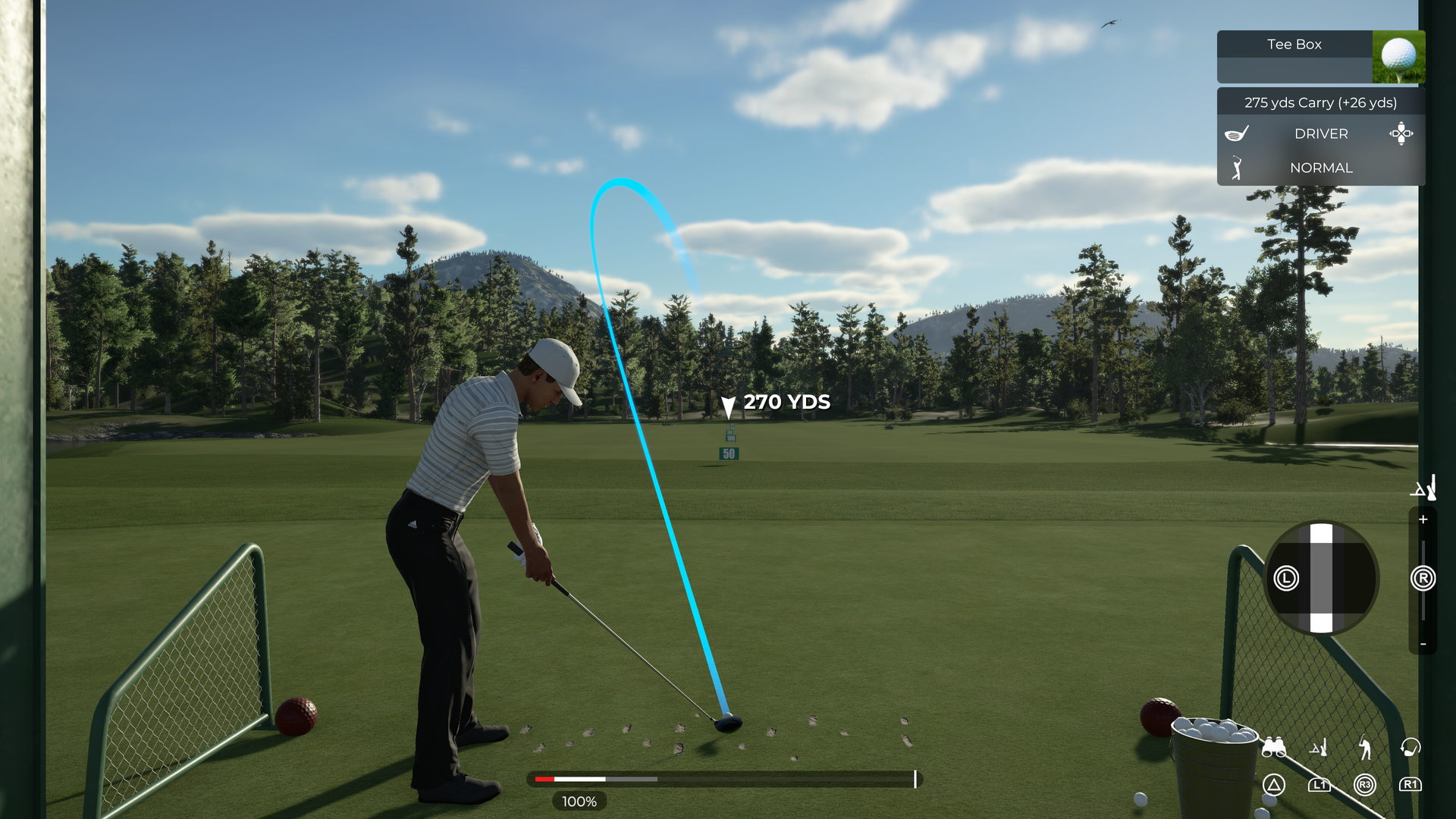 By moving the left stick to the left, this will generate a faded shot from left to right. 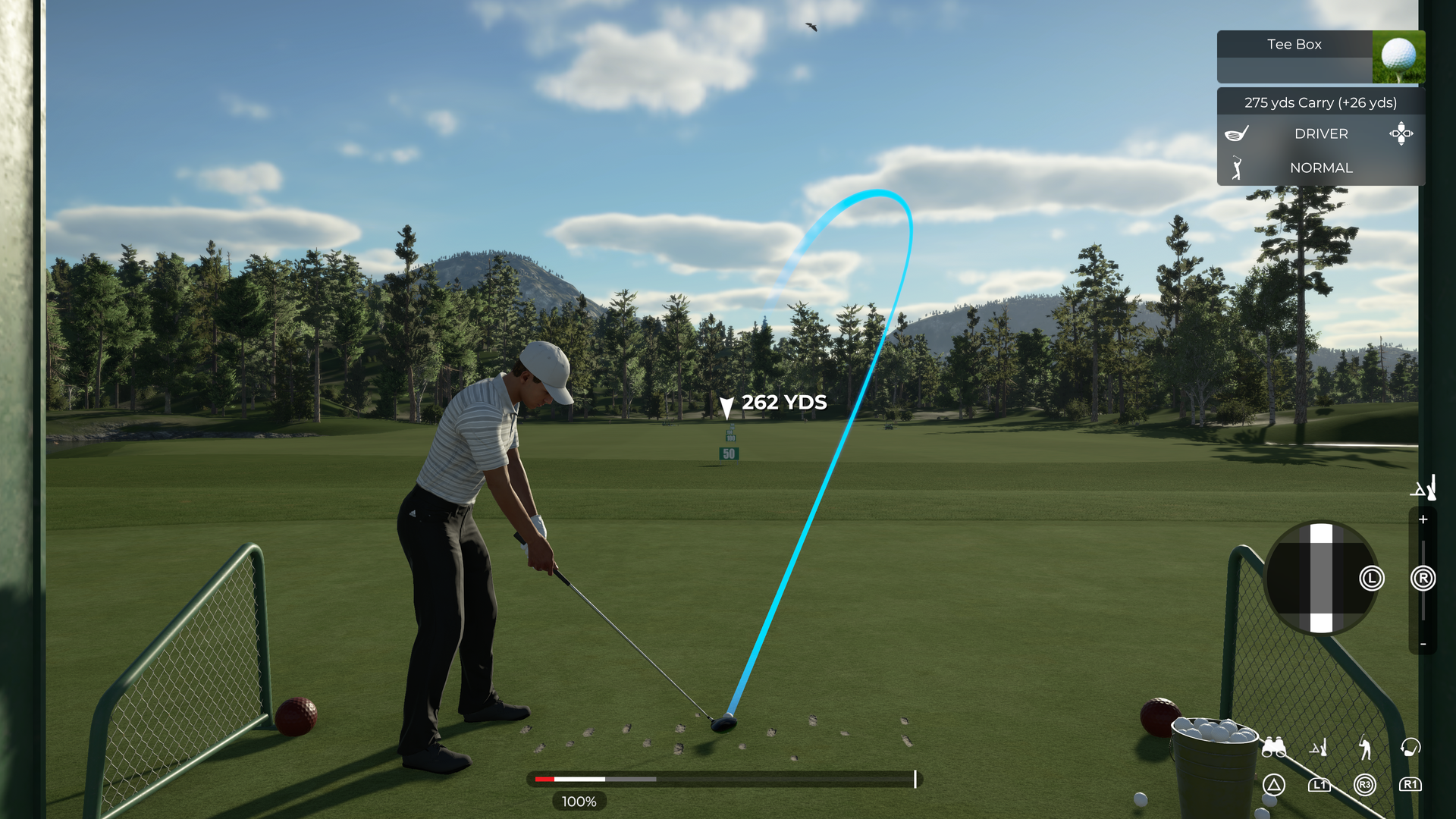 By moving the left stick to the right, this will generate a draw shot from right to left.

Note: this will be the opposite way round if you are playing as a left handed golfer.

Things to Consider Before Taking Your Shot

Before you hit your shot, you need to know where your shot is intending to land on the course before you strike the ball.

And the beauty of the game is that you can create your own courses to make them as challenging or as creative as you like. 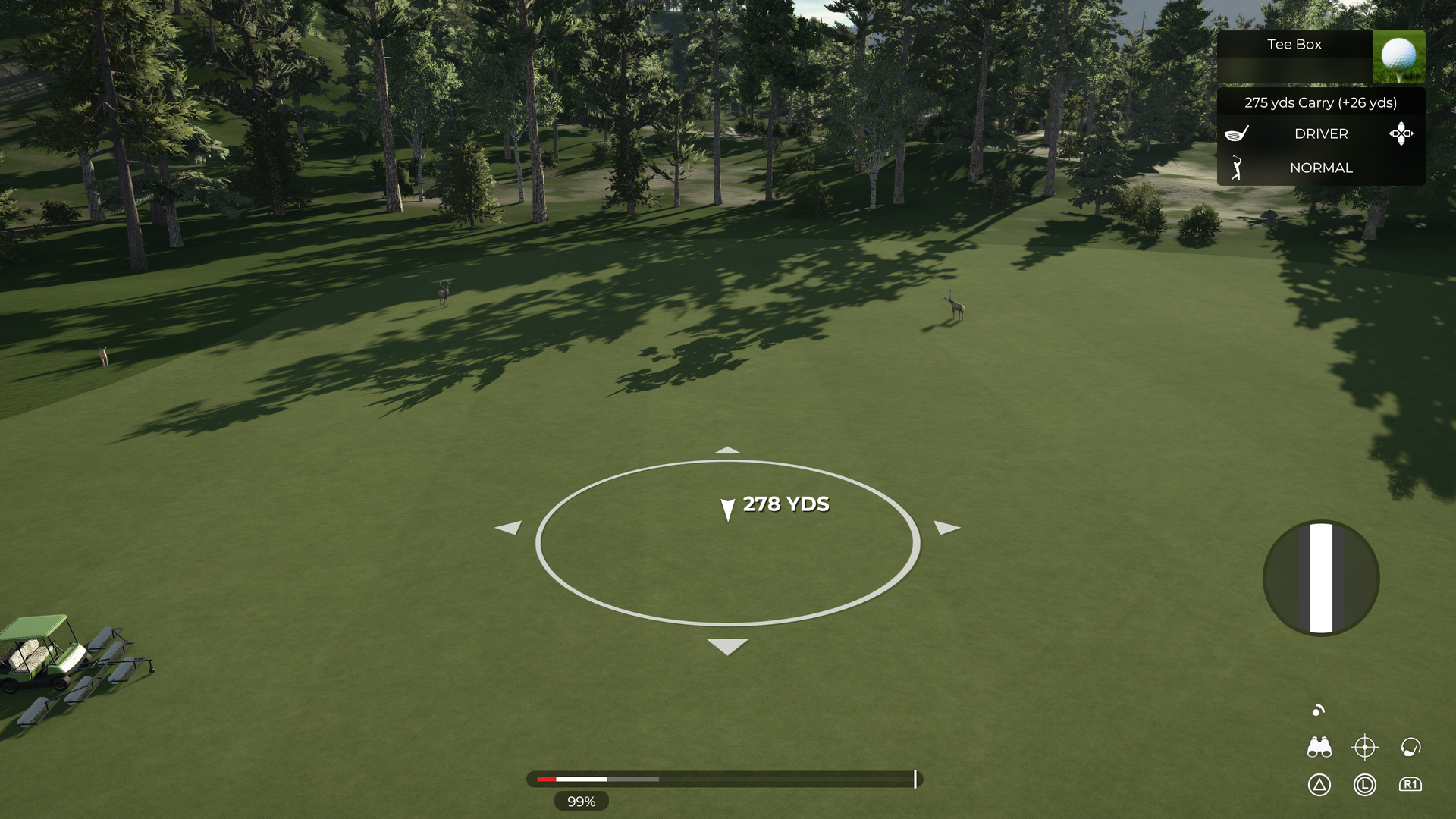 It is possible for you to zoom in, using triangle on the PlayStation or ‘Y’ on the Xbox. Using the aim stick, you can move your target to where you want the ball to land.

You should also use this to take into account the wind on a particular shot. For example, if the wind is blowing from the left, you will need to aim further left of your intended target.

It is worth noting that changing the shape of your shot to hit either a draw or fade, will make it harder to keep it within the white line mentioned previously when you swing to hit the shot - by definition this is a more complex shot to attempt therefore this is reflected in the difficulty of the game play.

If the hole is relatively straight, then it is unlikely that you will need to use this adjustment to your swing. However if it is a dogleg left or right, then you might need to use it in order to avoid bunkers or trees, particularly if you cannot go over the top of them.

Sometimes, you might want to hit a shot further or shorter than the intended, default distance for the club you have selected.

For example, a driver might be automatically set to 287 yards.

Once zoomed in, you can adjust the distance by moving the left stick. 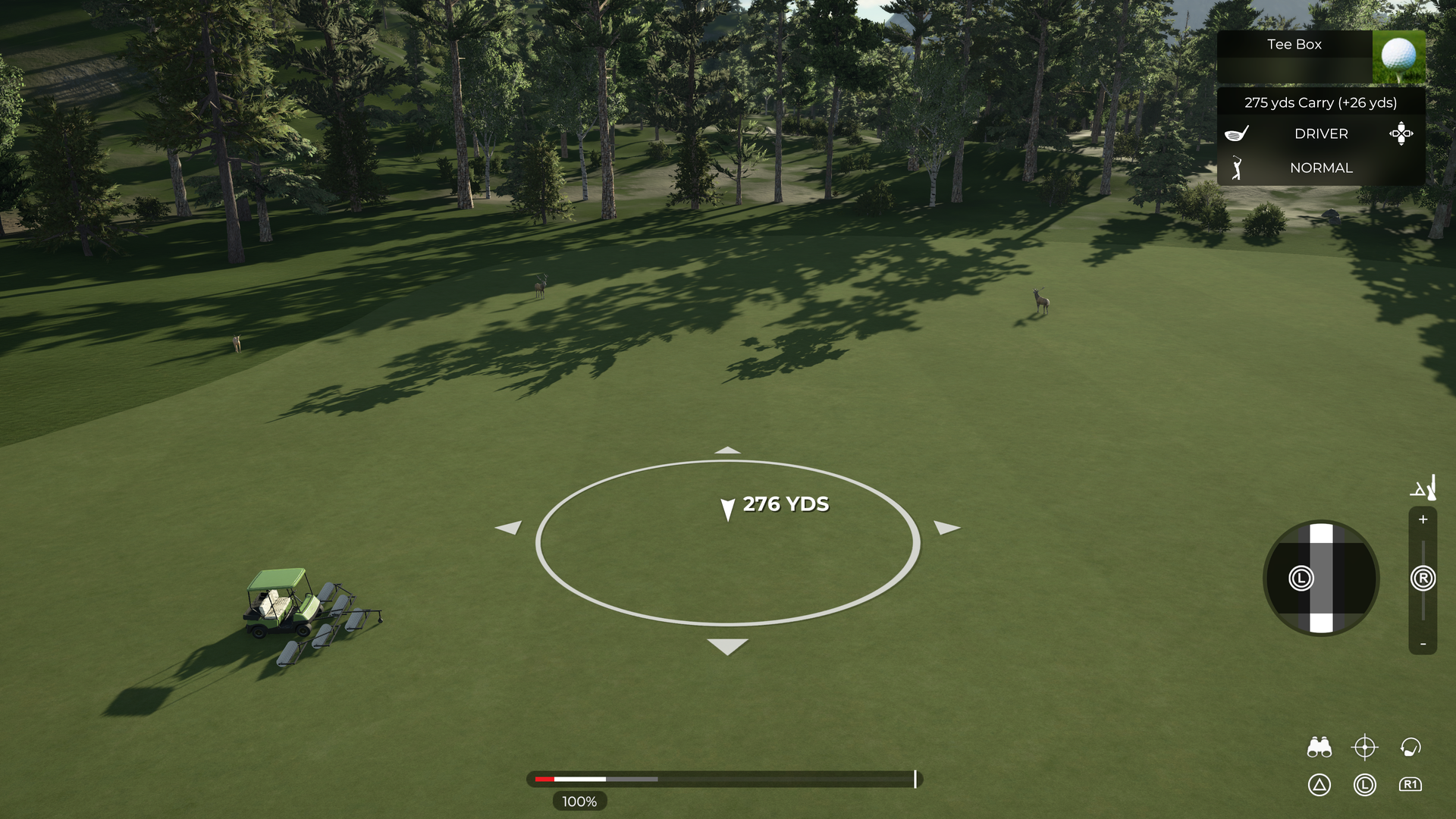 This will allow you to hit a shot that is not 100% the distance that the club is capable of. It might be that you are faced with a shot that is in between clubs. 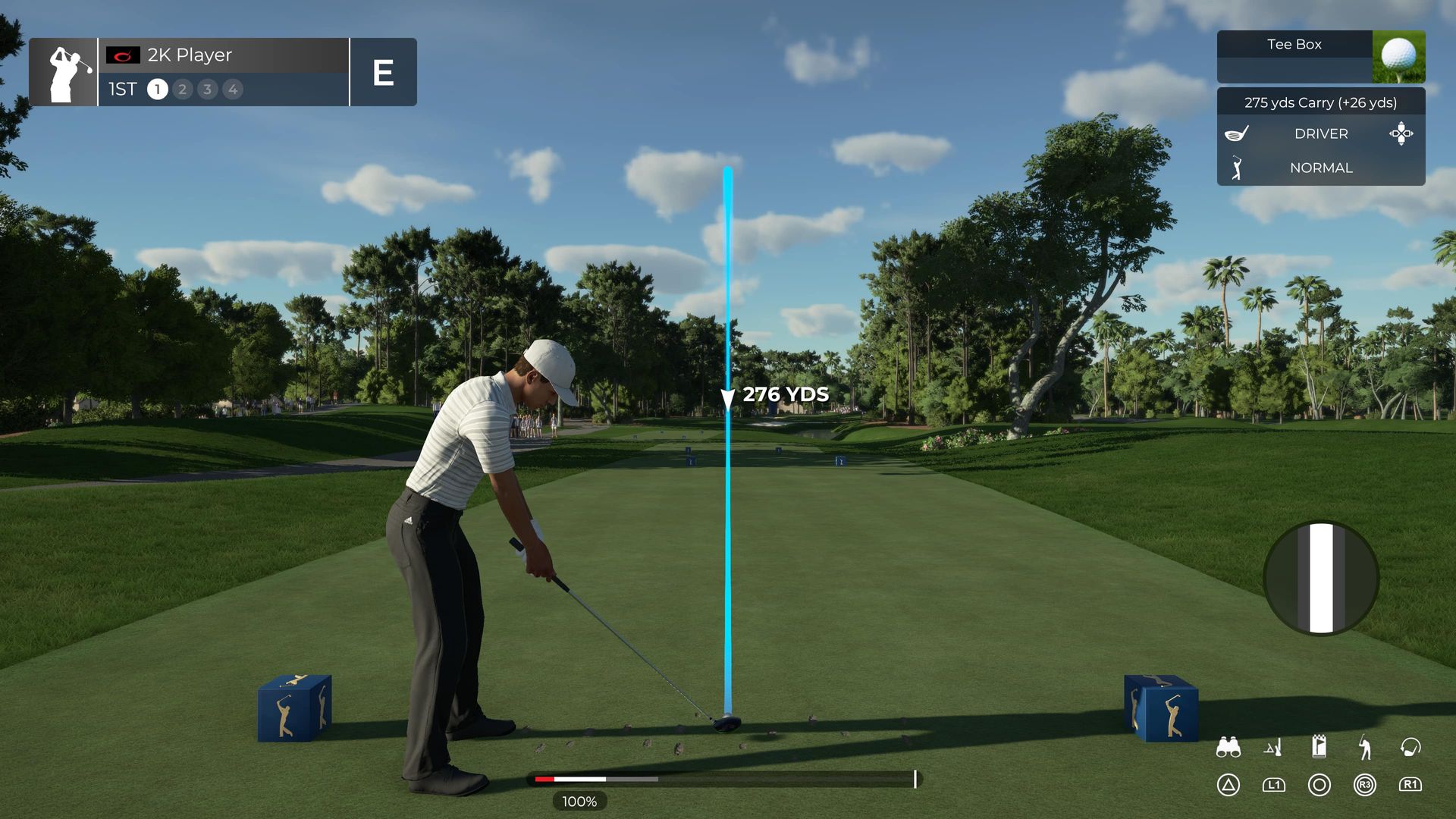 The bar at the bottom indicates the percentage you have selected in terms of distance.

You will still pull the left stick back and then forwards to strike the ball like a normal shot. But remember how important speed is, in terms of generating accuracy.

In PGA TOUR 2K21, there are a number of different shots that you can play when around the green. The amount of spin changes depending on the type of shot you wish to play.

These are pitch, flop, splash and chip shot - and each of them serve a different purpose, depending on how far you need to hit the ball, how much spin you need to generate and how soon you want the ball to land. 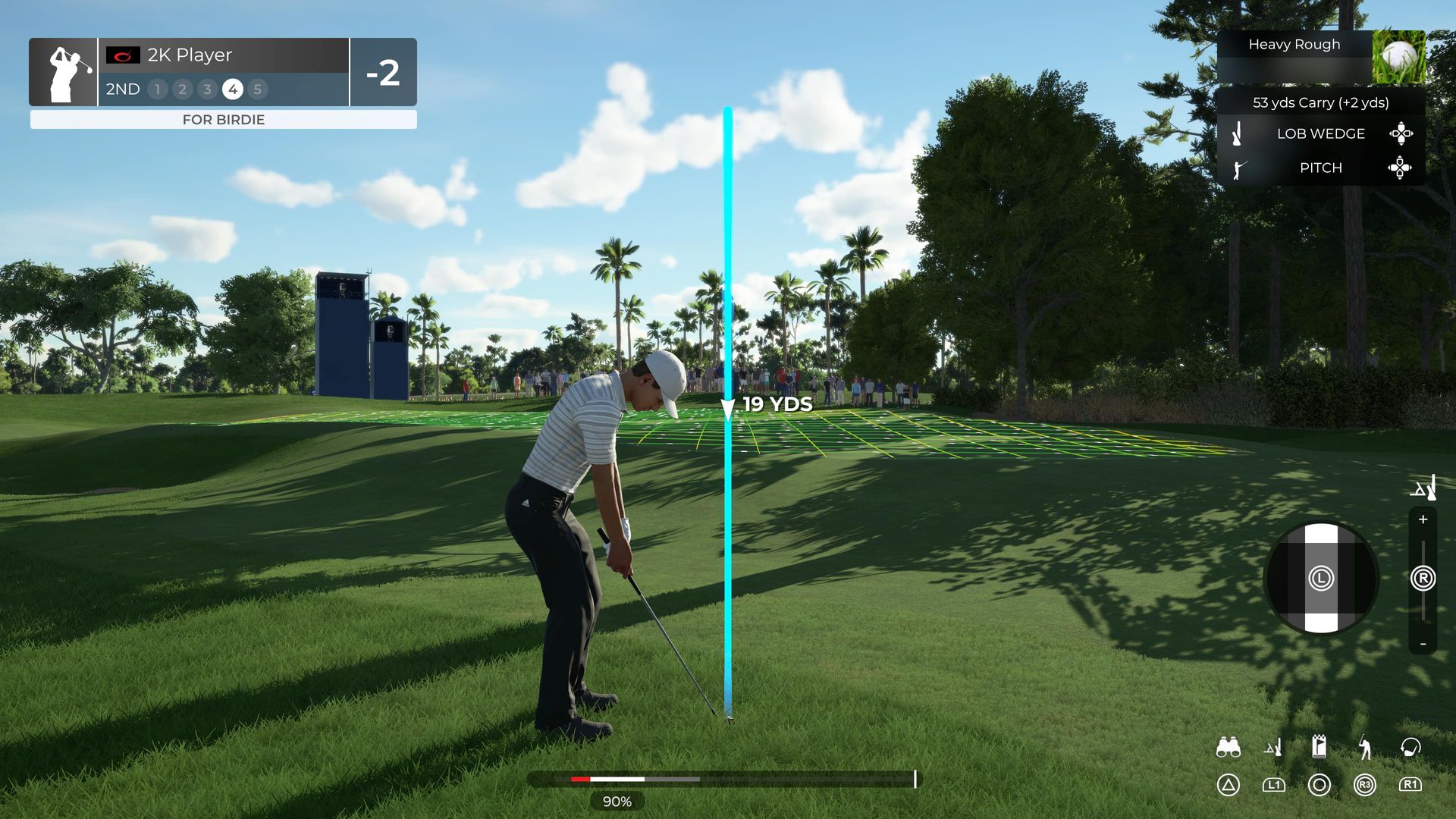 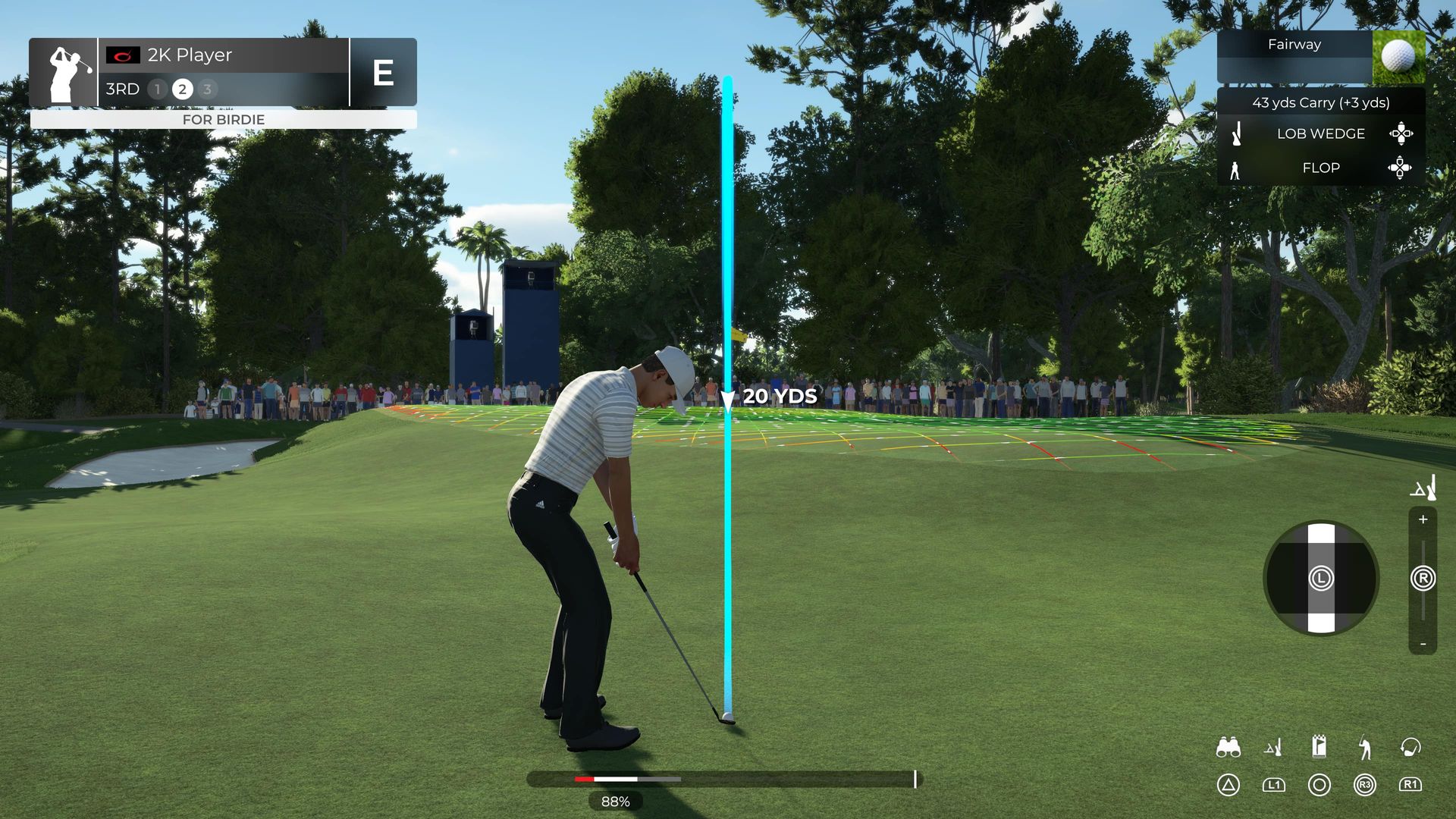 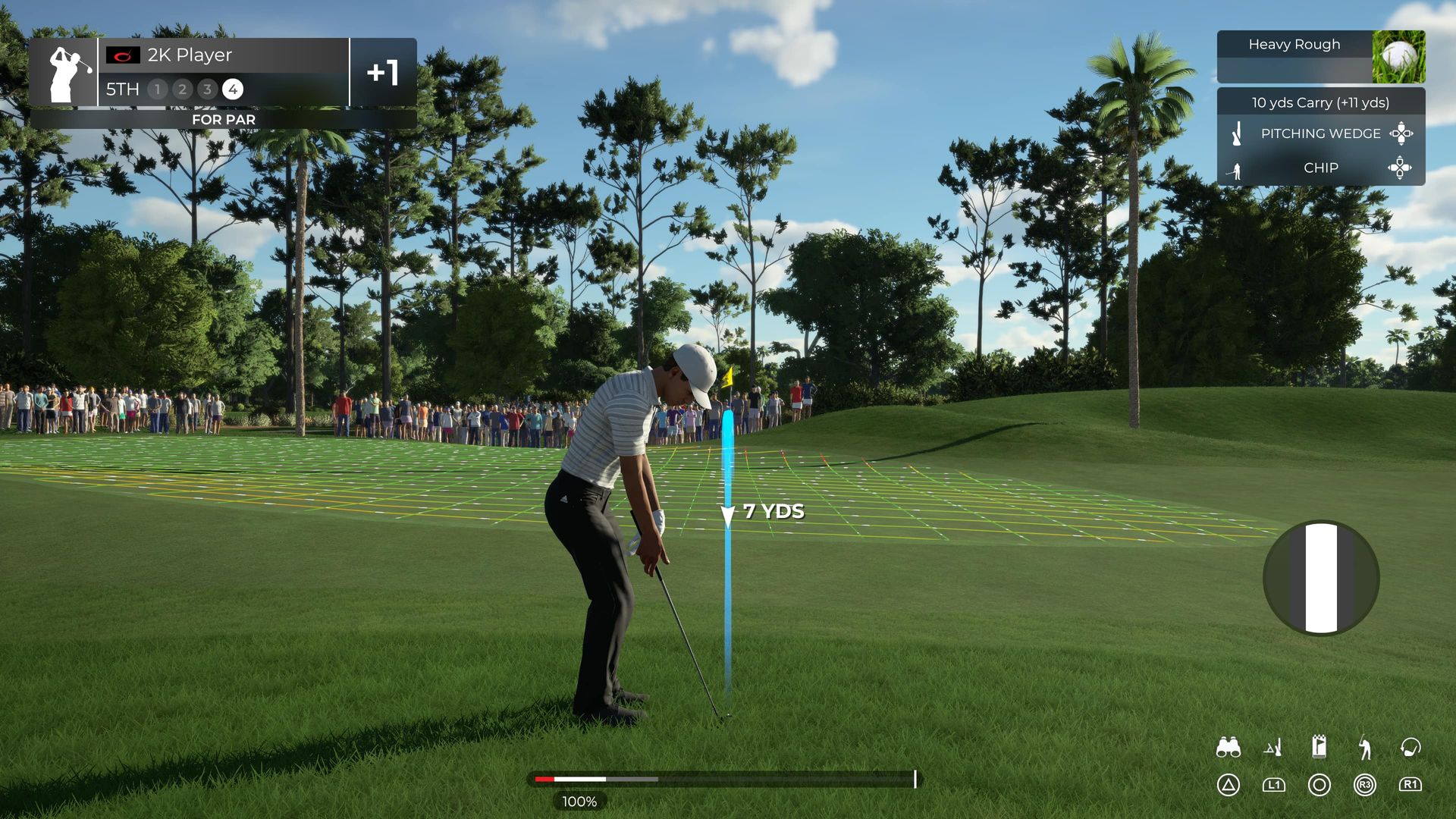 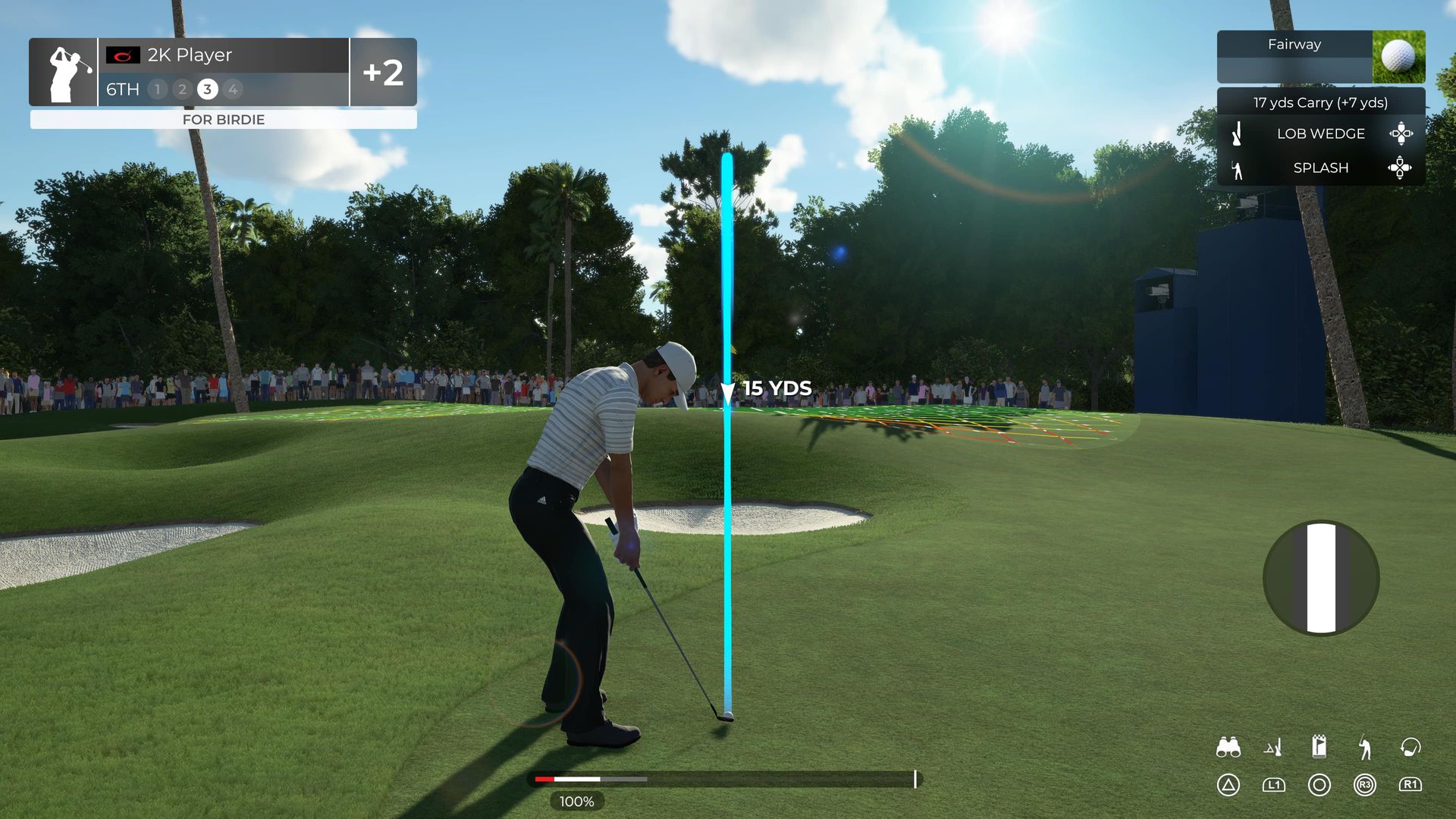 Keep an eye on the top right corner where it indicates the type of shot you have selected and how well you are going to hit the shot (as a percentage of the normal distance that shot would travel).

Generally speaking, the shorter the club, the steeper the club face angle, and as such, the more the ball spins.

A pitching wedge will likely generate less backspin, causing it to roll forward more, whereas a sand wedge or a lob wedge will generate more backspin and it will stop sooner.

So for maximum backspin, use the shortest club possible for the situation you are faced with.

You will need to take a variety of factors into account when choosing how much spin you want on the ball, including:

Each shot will give you different flight and spin characteristics, and once you have perfected these, you will become a true pinseeker; getting as close to the flag as possible and making your next job of putting the ball into the hole a doddle.

As previously discussed, moving the left stick will change the amount of loft you put onto the club.

So if you move the left stick up, it decreases the loft and flattens the trajectory of the ball flight. This will make the ball not travel as far but it will generate less backspin and cause the ball to roll on more once it has hit the ground.

Likewise, if you pull the left stick all the way down, this increases the loft and causes a much higher ball flight. This generates more backspin, which means it will not actually go as far once it has landed - you won’t get the amount of roll out that you would if you leave it in the middle or move it upwards. 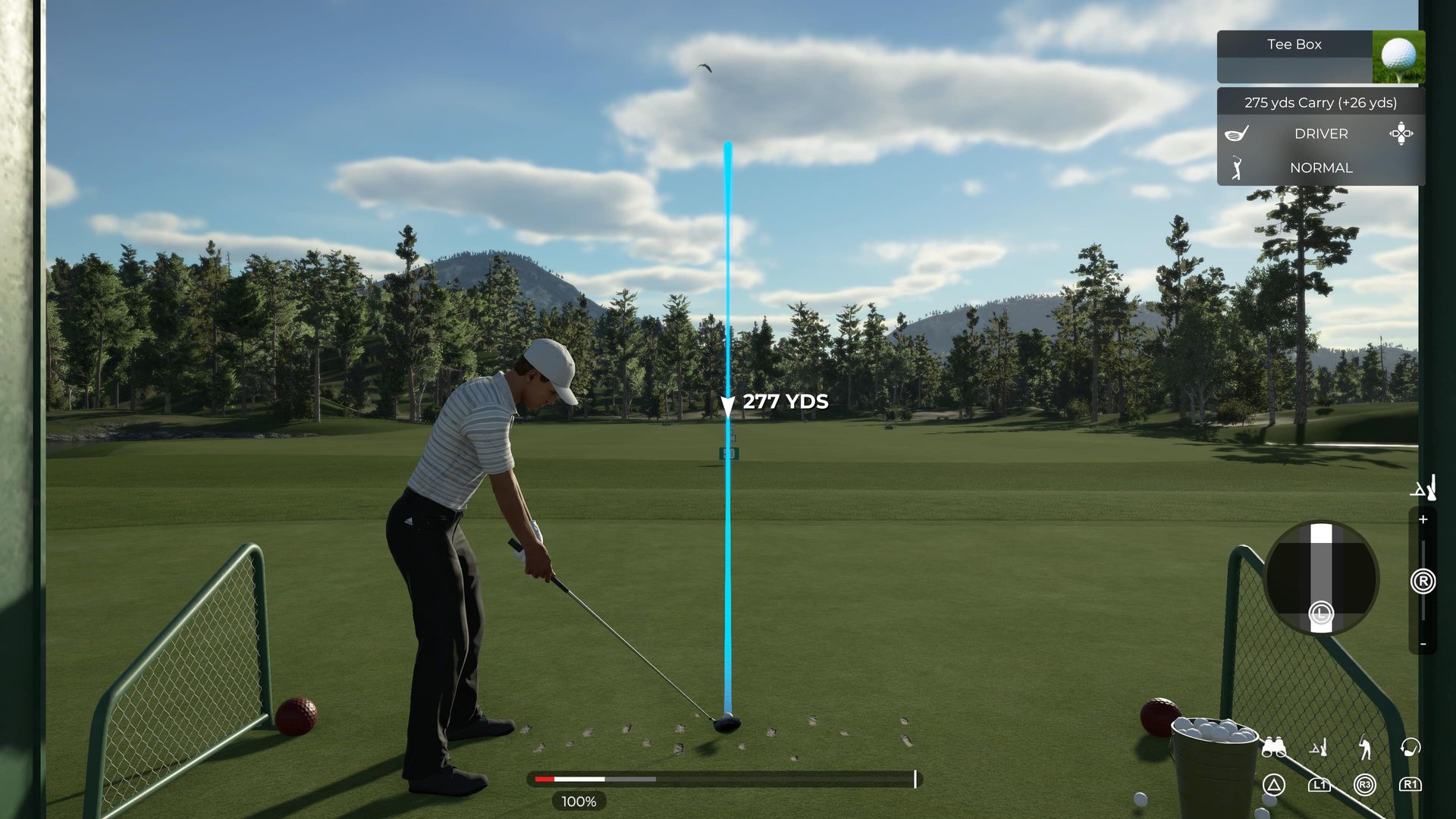 You can use this to your advantage in the wind - if the wind is coming from behind you in the general direction you wish to hit the ball, then getting it up in the air means the wind will help the ball travel further.

Or if you are playing into wind, then you may choose to decrease the loft so that the ball rolls out further once it lands and the distance is less affected by the wind.

Increasing the loft on the club (pushing left stick down) and moving the ball back in your stance (pushing right stick down) will generate the maximum amount of spin for that shot. 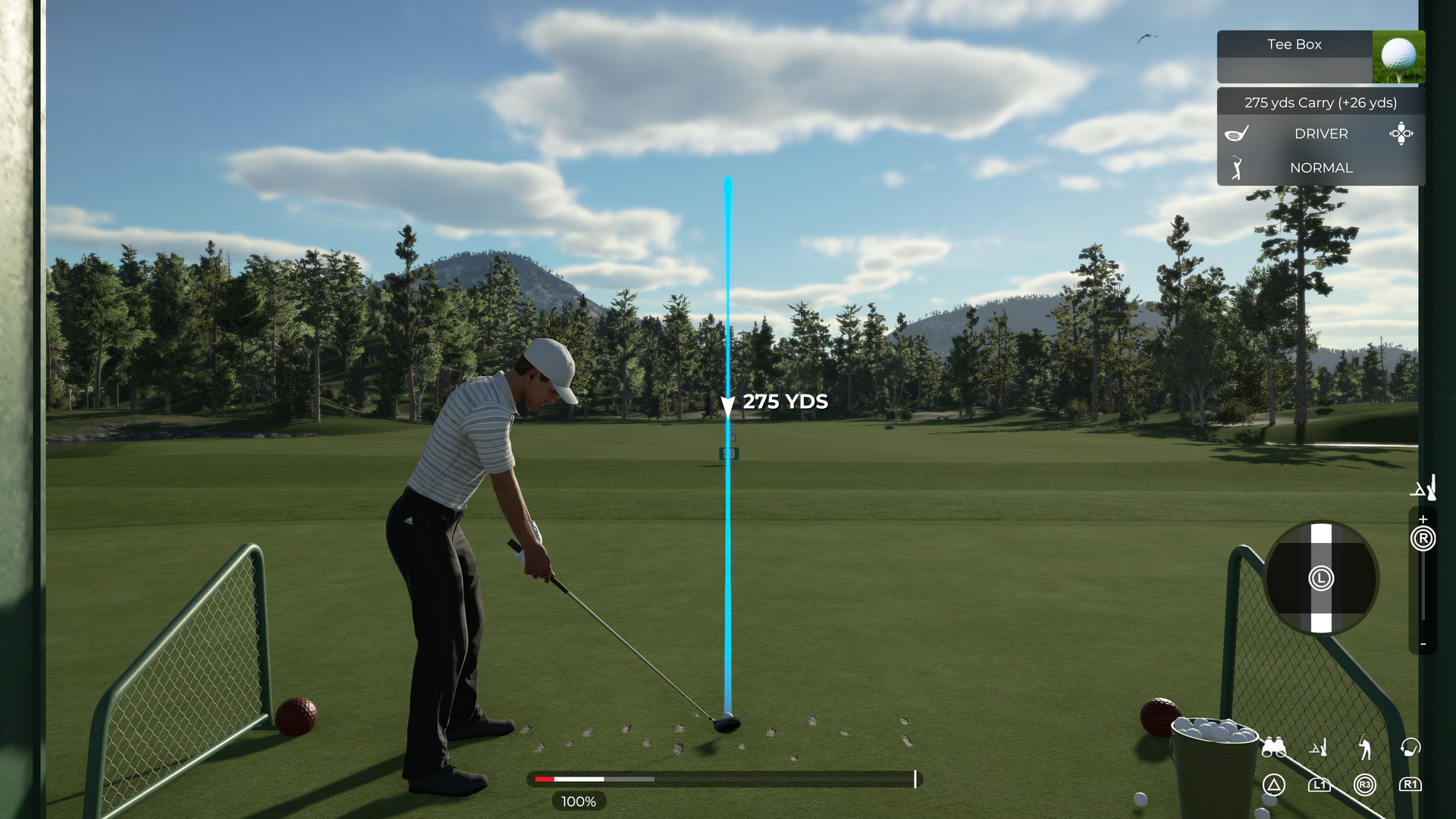 The same principle can be applied to any clubs from drivers to irons to wedges.

It is important to keep an eye on the number in the middle of the screen - this shows the carry distance of the club - and plus or minus the difference compared to hitting the club with the default, normal loft.

When you start changing the amount of loft and backspin, this will affect the yardage by either adding more distance or removing it.

A punch shot is one that is played with intentionally lowering the ball’s trajectory in terms of ball flight. It is normally used when playing in a strong headwind or when you need to get out of the trees, and avoid low hanging branches.

It is created by selecting a less lofted club, like a four or five iron, and reducing the loft and attack angle by pushing both sticks forward as far as they will go. 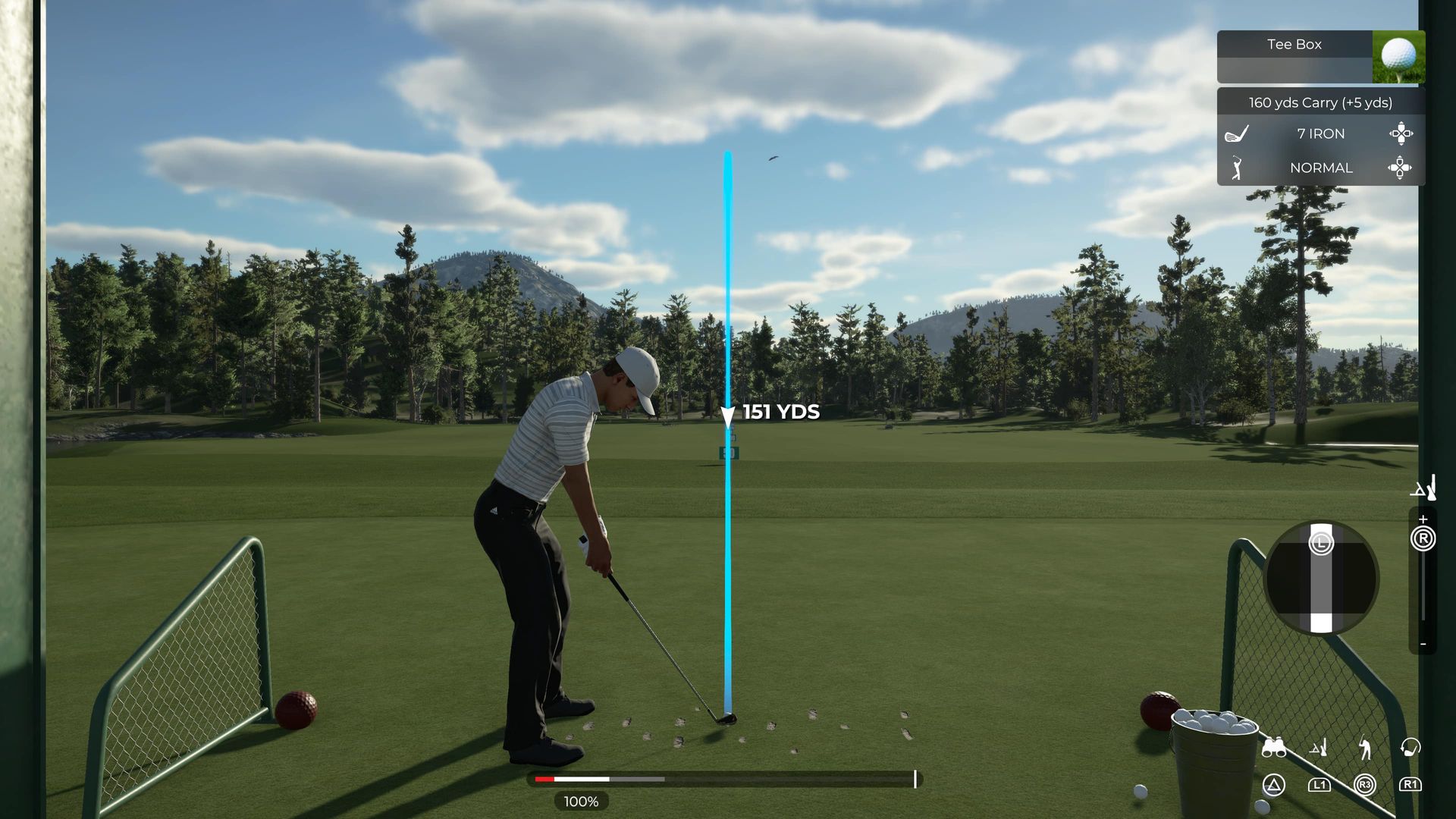 When it comes to hitting the ball, you probably only want to strike it with somewhere between 50 and 80% power, depending on how far you need to hit it. This will ensure that the ball remains relatively low to the ground and rolls out further.

As always, 2K offers a range of support for its customers. So feel free to drop us a message and we will be glad to help in any way that we can.